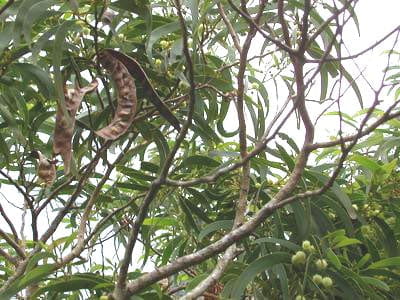 In the mountains of Lualualei, through the gates of Ma‘o, there is a tree. A tree that shouldn‘t be there, but, despite all odds, it still stands.

Māla‘ai ‘Ōpio or Ma‘o for short, is an organic farm that I work at every Monday, Wednesday, and Friday.  My whole day consists on harvesting, weeding, washing, weeding, planting, and more weeding.  I have a 20-minute break during work, but when I finally have enough time to sit down, breathe, and actually take in all the beauty that I am surrounded with, then itʼs back to farm work.  The clock stops at 12 p.m., and as soon as the hands of that clock meet that bold black 12, my devotion and dedication goes back to that tree.

I spend almost as much time with that tree as I do with my pet cat; I even talk to it to most times when Iʼm alone.  I named it “Koa Woods.”  Koa stands in a field covered with organic produce and native plants.  Some plants are dead, some well nourished, some grow just to experiment, and some have not yet sprouted.

I stand side by side with Koa every Monday, Wednesday, and Friday to water it.  It might not sound too out of the ordinary, but the amazing part of Koaʼs life is right on the side of it. There is another tree, barely even considered a twig, dry and brittle, the suppose-to-be result destined for any koa tree planted in this type of climate.  There are remains of plants and vegetables that did not make the status quo of our farms standards, but I refuse to let Koa be one of the many.

As I stand and water Koa, there are a group of faces that pass by, faces of the kids who struggle to keep up with balancing work, school, and personal life.  Just like Koa, those kids are being brought up in a community where they are destined to be pregnant, druggies, broke, or even homeless, but, just like Koa, they live to be noticed every day.  Koa is growing against common knowledge that says a koa tree would never survive in our environment, like the youth of my community, who some say can never make something of themselves in the world today, that we will never be anything but dried up twigs with no reason to be here.

Koa is a living example of what we are becoming; strong brave leaders.  Koa means brave, bold and fearless. It also means a soldier, a warrior. My Hawaiian family name is Kekoa, and I feel that keeping Koa Woods alive is my kuleana.

Sometimes I stand in the peaceful, hot, dry area where Koa stands, and I think of the life it could have if only I watered it in a different tropical, cool, and moist area where it should be grown.  Then I realize that instead of what I want for it, where it should be grown, why it is here in the first place, maybe I should be asking what can I do to keep it living in the beautiful place it already is growing at.  Our one solution in life is to always run away from things, search and look for a way out of our problems, but like Koa with its roots planted in the dirt, we are here and need to make the most of it.

If I have to come in to work every day or water Koa twice on Mondays, Wednesdays, and Fridays, I will.  Instead of digging it out and ruining its roots and home, I will work even harder, weed more, water, stay later, come in earlier, talk to it, and name all the trees that one day it will abundantly produce for the future, in the mountains of Lualualei, through the gates of Ma‘o, where there is a tree that, despite all odds, still stands.