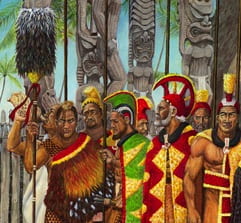 Words have power in the Hawaiian language, and personal names can evoke history and ancestral ties.  In his short story, The Naming, Umialiloa Harding, a student at UH-Maui College, invites you to experience a naming through a Hawaiian point of view.

When she was a young woman, Tahiti was awoken one night by the presence of a noble-looking young man standing at the foot of her bed.  There was no fear in her, only a sense of familiarity and fondness for the handsome specter that stood there in her room. He spoke to her, in a kind and gentle manner, of the life that she carried inside her womb and of the chiefly name the child was to bear.  There was a look of great sadness in the eyes of the visitor before he faded back into the common darkness where all dreams go.  She knew right away that her brother, who had died as a baby two years before her own birth, had come to visit her in the night. His name was Umi-a-Līloa.

“What did you just say Tahiti?” said old Aunt Hattie as she stared wide eyed at her great niece.

“I’m going to have a son, and when he is born, I will name him Umi-a-Līloa, after my brother who died before I was born,” answered Tahiti.

The old woman looked intently into her young niece’s eyes.  “That is a beautiful gesture, Tahiti, but how do you know you are hāpai and that you will have a boy?”

“I know because my brother came to my room last night and told me,” Tahiti simply replied.

Hattie turned pale.  How could her niece possibly understand the complexities of the events that were suddenly being set into motion?  “It was just a dream, Tahiti, a beautiful dream,” soothed the old woman.

The young girl was disappointed at her great aunt’s reluctance to believe her.  “No, Aunty, it wasn’t a dream.  My brother came to me last night as a fully grown man and told me sad things that made me cry.”

The old woman could feel her stomach begin to tighten with anxiety.

Tahiti calmly looked at her great aunt and said, “He told me that I was expecting a boy and that I will name him Umi-a-Līloa, a name that belonged to a great aliʻi long ago.  My brother told me that such names were kapu because of their great weight, a heaviness which only aliʻi could carry.”

Aunt Hattie could not believe what she was hearing.  The words spoken by her beloved niece exposed a tragic family secret, bringing it out of the darkness in which it had been buried for so many years.  The old woman’s doubts had already been extinguished, but she needed to hear the rest of what she already knew.  “If this name is forbidden, Tahiti, then why would your brother ask you to do such a thing?”

“Why on earth would he tell you to do something that is considered kapu, Tahiti?  Surely you must feel that there is a dangerous element involved here?” Hattie pleaded.

Tahiti looked forlornly at her aunt and said, “My brother was an innocent child who suffered because he was neglected by our mother.  He suffers still.”

Hattie nodded.  “Yes, you are right about all of that.  But there is more that you should know so that you will understand exactly why I tell you not to use that name.  I still don’t know why your mother chose it for your brother; but it was an arrogant thing to do.  In our culture, you don’t just pick a great name like that randomly and then place it on a child.  There are protocols that need to be followed in these matters.  I’m going to explain this to you as plainly as possible, Tahiti, so that you will be able to understand the serious nature of what you intend to do.”

The girl silently nodded and patiently listened to her aunt’s story.  “Umi-a-Līloa was the illegitimate second son of Līloa, the Mōʻī of Hawaiʻi Island.  Being of only half noble blood, he ascended from the ranks of obscurity to become a mighty aliʻi-nui himself.  To free his people who had suffered under the heavy hand of his tyrannical brother, Hakau, Umi-a-Līloa defeated him in a bloody battle and later sacrificed Hakau to his war god, Kū.  Umi-a Līloa was a great king who was well loved by the people of that time.”

“What I am about to tell you, Tahiti, may sound very unbelievable, because we now live in contemporary times, but you must take heed! Listen as if your life depends on what I say because it does.”

The cooling trade winds came to a dead stop.  Tahiti could feel the fine hairs at the nape of her neck begin to rise as if reacting to some form of static energy.  The older woman’s eyes became stormy as she fixed them upon her niece and spoke in a manner that sounded like many voices.

His feet must never leave this island.

Because of the impurity of modern life, the child cannot nurse from your breast.  Only water from the clearest springs found in Hana can he drink, and only the freshest poi may he eat.

No other child can you hold in your arms.

No sound of profanity or raucous laughter must reach his ears.

No other human shadow shall pass over his.

If you fail at any one of these kapu, Tahiti, then your son will die.”

Hattie closed her eyes and silently said a prayer to Akua, asking strength and guidance for her niece.  After composing herself, the old woman continued to speak, but this time, in a more gentle and familiar tongue.

“My innocent child, the name that you want to give your son belongs to another time. It holds so much mana that it could never be worn by anyone except the mighty ones of old, warrior kings who fought beside their gods of war in the great battles that forged the history of these islands. The name belongs to those who walk on the other side of the etheric curtain which separates our world from theirs.”

“Who are they?” asked Tahiti.

“The dead,” said Hattie, “for even in death, Umi-a-Līloa is revered by his armies and everyone else who followed him into Pō.  If you are vigilant in keeping the kapu that I have prescribed to you, then your son will live and grow strong.  But forces that are beyond your understanding will put him to the test.”

“To see if he will be worthy.” Hattie sighed.  “It will be a lifetime of trials and tribulations for the both of you.  Mark my words, child; your son will fall, but it is the manner in which he rises that they are most interested in.  Your test will be to endure the pain of watching your son suffer and not be able to help him.  If he falls and never gets back up again – this is how you will know that they have taken the name back.  You will grow old with only heartache as your companion.”

“Is this the only possible outcome? Misery and pain?” asked Tahiti.

“When your trials begin, I will no longer be here.  They will come at a time when you least expect.  But take heart, my child, every aliʻi has had great teachers who have helped to guide them on their paths.  There is always hope.  Be ever watchful for these guardians.  Your son will survive if he is found deserving.”

The old woman lovingly smiled.  “Tahiti, this is the price of the name you are about to give your son. If you choose not to, Tahiti, then you will live a normal and happy life.”

Hattie cupped her hand beneath her great niece’s chin.  “Do you still choose to name your unborn son Umi-a-Līloa?”

With tears streaming down her face, the girl lifted her head.

“Then it has begun,” replied the old woman.