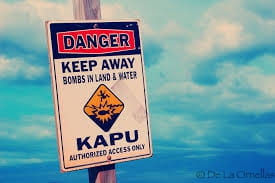 Before he came to Leeward CC as a student, Navy veteran Tracy Dixon spent three years removing ordnance at Kahoʻolawe as an Explosive Ordnance Disposal Diver. Like many newcomers, he didn’t know Hawai’i history and saw the island’s value only as a military target. But as he came to know the island, Tracy grew to understand the loss and pain Kaho’olawe represented.

He writes, “My poem is a memory that runs like an old 16 mm color documentary playing in a continuous loop. I want my readers to remember the surreal, dystopian place that Kahoʻolawe had become after 50 years of environmental abuse in the name of military readiness. I want to give them that film that plays in my memory.”

The mechanical Beast woke up,
and we climbed aboard.
It crawled away from Base Camp
twisting and groaning,
navigating a road,
more like a scar ripped into the tortured landscape
than a road.

This
forsaken
windblown place,
silent
in its anguish
except for the rumbling of our six wheeled Beast.

The dirt of this place was granular and bright red.
In the full morning sun,
the redness of the earth contrasted starkly
with the clear blue sky.

Orchards of kiawe,
low canopied fruitless trees,
their branches fixed with brutal thorns.
They were the kind that pierced boots
and ripped flesh.

A feral cat stopped in frozen fear,
looking back at us,
and glancing over its starving skeletal shoulder,
disappeared into the heartless orchard
in a blurred dash.

The plain was littered with angular non organic debris,
randomly scattered
in the most appalling way.

Low drag and general purpose
bombs
laid in every state of shattered and oxidized decay.

The beast stopped, and we dismounted.
Underfoot were thousands of iron shards,
fragments
left from a violent past.

Hang-fired
misfired
dud-fired
castaways
from cold wars,
hot wars,
and all of the uneasy periods in between.

Some one whispered harshly,
“Don’t pick up that golden egg.
It’ll be a closed casket funeral for sure.”

An eerie garden of fins,
erect in the parched red dirt
poking up like carrot tops in an industrial, aluminum way.

I carefully excavated
a treacherous harvest
of eighty millimeter mortar projectiles,
the ones with the widow-maker fuse.

What a strange vegetable, and what a frighteningly exhilarating thought.

Up on the hill,
two-hundred-thirty-five
three-point-five inch bazooka warheads
placed upside down to blow holes
in the terrified earth.

All of them topped with
snow-white balls
of cyclo-tri-methylene-tri-nitramine;
fluffy innocent looking
carcinogenic balls,
all bow-tied together with yellow striped Ensign Bickford
detonating cord.

Crouched against the dirt wall of
an abysmal crevasse,
we felt
the rolling thunder, an explosive timpani
of millisecond delays that produced a carpet of dust and smoke
that rose in a perfect rectangle,
and then morphed into a brown grey-snaking jinn.